Sounding Good on the Phone

May 14, 2018
As a Sales Engineer and part-time Technical Trainer (which is what sales engineering basically is), I spend a LOT of time talking to customers on the phone. Usually, these conversations are recorded for reference, and they're typically done in conjunction with video or screen sharing.

Usually, calls are done with a computer-based conferencing tool like GoToMeeting, Zoom, Cisco WebEx, Microsoft Teams, or Google Hangouts. Long ago, I decided that if I was going to spend so much time on the phone, why not ensure that my audio was crystal clear? This would make everyone on the call more comfortable, it would make me easier to understand, and it would make me sound more professional.

Here's where my setup is today: 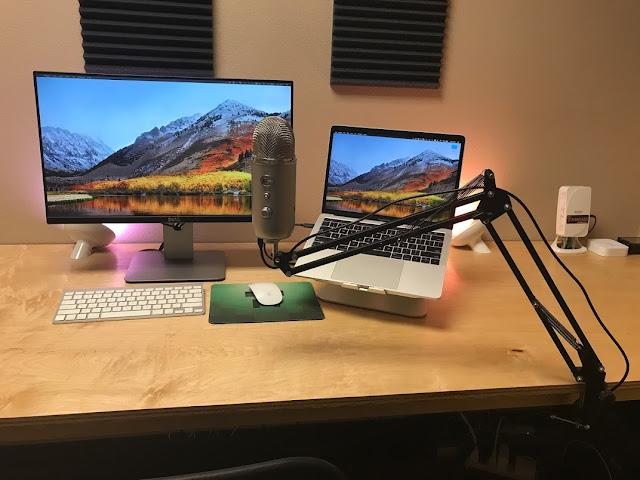 This mic is about $130 on Amazon, but you can find it on sale for as low as $80, which is what I paid for mine. It connects with MiniUSB, and functions as both a microphone and soundcard. It also has a 3.5mm headphone jack on the bottom, which gives both instant feedback (so you can hear what you sound like), as well as audio from the computer.

Edit: Hey, it's Joel from 2020! Blue has come out with another microphone I really like: the Yeti Nano. It's a bit smaller, has a few less features, but it does all of the same important things that the Blue Yeti did. I think I'd recommend that these days over the original Blue Yeti.

Whether I'm using the original Blue Yeti or Blue Yeti Nano, I never plug my headphones directly into my MacBook; they just stay plugged into the Yeti.

No matter which mic you choose, be sure to speak directly into it!

The Yeti comes with a desk stand... but it's always in my way. For $13, this cheap boom gets it off the desk and out of your way. You can push it out of the way when you aren't using it, and you can still use your mouse and keyboard when are are using the microphone. Best of all, you can position the mic perfectly to get the best sound.

The boom that I used is particularly cheap... so if you're not afraid to spend a bit more, that might be a good idea. Still, for $13, it's doing the job. Just make sure that whatever you select is tough enough to handle the Yeti, which is known for being heavy.

While these panels won't decrease noise, they do a great of of reducing echo. Until humans get a MIMO upgrade, we need to reduce echo as much as possible, and these panels help do that. I just pinned them to the drywall with a single thumbtack each. They're about $20 for a package of them on Amazon, and I used 2 packages for my little office. It made a big, big difference. 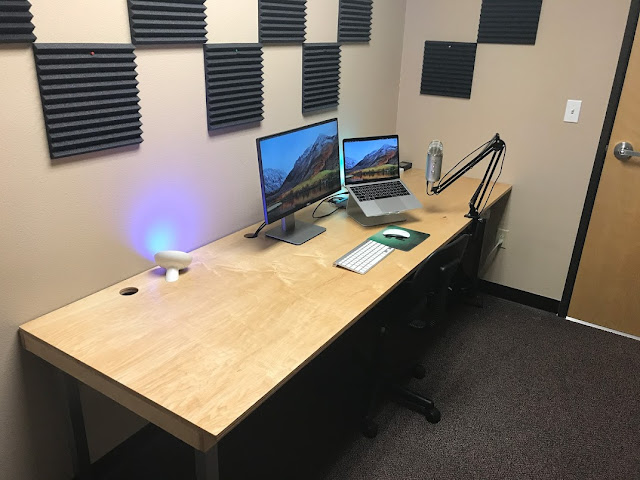 These plug into the bottom of the unit. I use these inexpensive Audio Technica ATH-M30's, and they've been with me for about 5 years now. Go look at Audio Technica's entire product line before purchasing, as they have lots of options. But seriously, any headphones that you can plug into a 3.5mm headphone jack will work fine.

And here is a YouTube video, where you can hear the results!

The disadvantage of this setup is that it only works with computer-based comms. If you're using a plain old telephone system or have a desk phone... it probably won't work for you. Me personally: I think that phones are probably the worst way to communicate. Between Microsoft Teams, Zoom, Google Hangouts, or even bridges from the internet to normal phones like Google Voice, I think there are much better and clearer ways to communicate than picking up an actual phone handset.