August 05, 2017
I'm a huge fan of Volvo 850's, but they aren't without a few flaws. One of them is the odometer: the mechanical odometer is driven by a small electric motor in the gauge cluster, and it has a tiny nylon gear that loses a tooth, causing it to stop counting miles.

Fixing it costs a couple of bucks, but it's a pain. The dash has to come out, which takes a couple of hours, and comes with the inherent risk of breaking things. As a result, there are many 850's on the road with inaccurate odometers.

Pre-OBDII Volvo 850's (1993-1995) provide the ability to plug in a fly wire under the hood, press a special button pattern, and then watch an LED blink back the mileage, which is stored digitally in the gauge cluster. Then, you can fix the odometer gear, and roll up the mileage to the correct number in the process.

Sadly, OBDII Volvo 850's (1996-1997) lack the fly wire, button, and LED. Fortunately, there's a way to read the mileage through the OBDII port with an ELM 237 Bluetooth OBDII reader, and an Android phone. This might be possible with iOS or with a terminal emulator in Windows, but I have an Android device, so that's the route I took.

Type in the following commands, one at a time, and hit enter after each one. Capitalization does not matter. After each command, it should reply with "Ok". A couple of commands will reply with a short bus initialization message after a short pause.

When you're done, the output from the car should look like this: 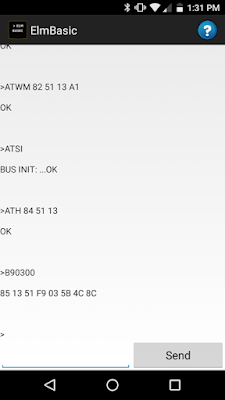 B90300 will spit out a hex code. Use this calculator to convert it to the actual mileage of your Volvo 850.