August 04, 2016
I absolutely love my Pebble Time. For quick glances at my next calendar item, quick replies to text messages, and believe it or not, as a watch, it's amazing.

There's just one major drawback to the Pebble time: the bezel. It's a piece of stainless steel metal with a PVD coating, and while it's sort of tough, it's far from invincible.

Since the PVD coating has a bit of texture to it, items tend to scratch off on to it. For example, if you brush up against a wall, some of the paint will come off of the wall, and onto the watch. You think you've scratched it... until you wash it.

Eventually though, you'll scuff your watch up against something harder than the PVD coating. Zippers, wedding rings, and even my wife's Pebble Time Round (I'm a leftie, so our watches like to kiss when we hold hands) are all capable of scratching the delicate PVD coating. 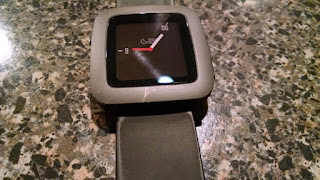 The solution, which I first saw in this YouTube video, and then later in this Imgur album, is to sand off the PVD coating, and then put a "brushed" finish on it.

To sand and brush your Pebble Time, you'll need:
1. Remove the watchband.

3. Run your fingernail around the gap between the glass and metal bezel, shoving the tape into the gap, creating an imprint. This creates an imprint where the gap is.

4. Carefully and gently run a hobby knife around the entire imprint to cut the tape. It doesn't need to be cut all the way through, just scored.

5. Tear up the outside piece of tape, leaving the screen covered. 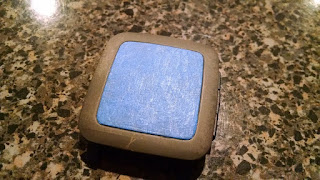 6. Using some 400 to 600-grit sandpaper, gently sand off the PVD coating. I found that sanding in straight lines with very small pieces worked best, avoiding sanding on the tape (you don't want it to lift) and the sides of the metal bezel (I wanted to preserve the shiny edge of the bezel on the sides of the watch). 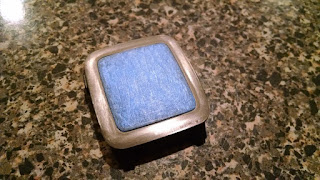 Note: I didn't do this, but if I was going to do it again, I'd sand it all off, and then I'd spend more time sanding "north/south" only on the watch to get all of the scratch marks going in the same direction as the brushing process later on. A few of my circular scratches from the sandpaper are visible, I could have avoided that by trying to go "north/south". 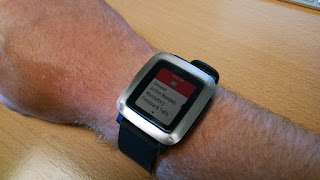 At this point, I wore the watch around for a few days, and occasionally broke out the sandpaper to work on it a bit more.

7. Using the Scotchbrite pad, apply a "brushed" finished by moving the Scotchbrite pad from north to south and south to north on the bezel face. I usually started in the middle and swept upwards or downwards to avoid brushing the shiny sides of the bezel. Also, keep an eye on your tape... you wouldn't want to brush the glass! I started out gentle, and applied more pressure as time went on.

Here are the results! 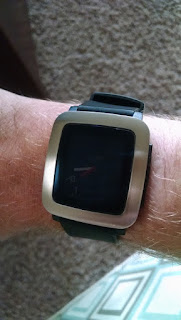 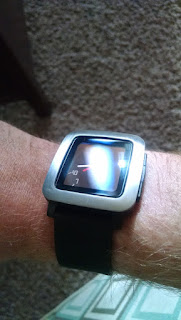 Yep... that'll work! If you like the brushed look and are willing to do a little DIY a few months after you buy, the Pebble Time is a great choice, especially since they are selling for less than $99 on Amazon!
Pebble